David’s kindly sent along an update with some important news, including a clarification of the upcoming publishing schedule and some info about an upcoming announcement about a new publisher for a new project – a “trilogy.” No titles here, but if you’re familiar with some of his older blog posts, you might make some assumptions like I have.

Thanks to David, as always!

In Stasis – a blog

It’s half ten in the morning and Sue’s up in Manchester, at the regular three-weekly conference for the soap she writes for, Coronation Street; Francesca – my youngest, is in Paris with her boyfriend, Remus;  Georgia, daughter number three, is in Los Angeles with her girlfriend, Georgiette, and Jess and Amy are at work here in London. Leaving me here, in the midst of chaos, awaiting delivery of a new mobile phone (for Amy).

Chaos? Yes, absolute chaos. We’ve planned for a long while to get the builders in to strip out the kitchen and make major changes in the basement, and on Monday last (the 18th) they arrived, to help us in the final stages of moving all of our stuff out of the front half of our basement, into storage, the garden office and… the other half of the basement, wherein I now sit, laptop on my knees, surrounded by piles of “stuff”.

And whilst the builders are pushing ahead with real energy, this is just a bit like suffering advanced Alzheimers (believe me, I’ve seen it up close with my dad) with nothing in its remembered place, and every little search – for a spoon, for certain papers, for… well, ANYTHING – requiring half an hour of frustrating exploration.

It’ll all come good, I know that. Our Polish builders are great and already we can glimpse how it’s going to look (and they’ve been working on the project only two and a bit days) but the three-to-five weeks they’ve estimated for the job does feel like a bit of a prison sentence. Until it’s finished and all the stuff is back in its correct places, my life will be in a kind of stasis.

It’s three to five weeks of sleeping on sofas, of misplacing things, of putting things on hold because attempting to write anything really would result in something unpublishable. That said, the timing is good, because another project of mine, which I’ve been waiting on a publisher about, has now had an official offer, and sometime in the next week or two we’ll be making a big announcement. So it’s best if we get all of this building work out of the way now rather than have it interrupt the writing later on. Because once I get back into this, I’ll be doing nothing else (except, of course, the odd blog) for the rest of this year. By the 31st December, I aim to have this project done and dusted, the trilogy completed, all loose ends tied up neatly, ready for me to start the final four volumes of CHUNG KUO in the New Year of 2014. And boy have I some great ideas for that!!

So here I sit, listening to the builder guys hammer and saw and drill, making their own kind of chaos – the kind that, by the end of the process results in us having a wonderful living area and a great new kitchen (I’ll provide you all with photos when it’s done).

Oh, and just to say… Book Five, THE ART OF WAR, was officially put back a month, so the new publication date is the 1st of March. Apologies to those whose hopes were raised and dashed, but it will be with you soon. Book Six, AN INCH OF ASHES will follow in August, with one more volume, THE BROKEN WHEEL, Book Seven, before Christmas.

More in a few days. But for now, Tsai Chien!

Adam Whitehead from The Wertzone sends along the following interesting note.

Corvus have released their new catalogue. AN INCH OF ASHES has a release date of 4 July whilst THE BROKEN WHEEL is dated for 7 November. Looks like they may be downsizing to three books a year rather that four.

See for yourself on the recently released Atlantic Books catalog.

Blog reader Adrian Banks sent along a link to a recent New York Times opinion piece (In China, a Vast Chasm Between the Rich and the Rest) about the growing divide between the rich and poor in China. The last line, Adrian notes, are particularly interesting. Remind you of anything?

“The only difference is we [the lower classes] cannot see the sun. In a few years, when I have money, I will also live upstairs.”

Not too much in terms of news lately in the world of Chung Kuo, until today, that is! Book 5: The Art of War is out today! If you haven’t already, buy it now at amazon.co.uk! Also, I hear that Barnes and Noble in the US will have limited runs of the UK editions in their brick-and-mortar stores. So, fellow Yankees, head out to your local B&N and check it out.

Also going on today is this: the cover art for Book 6: An Inch of Ashes, featuring… Fei Yen. Click for full size. 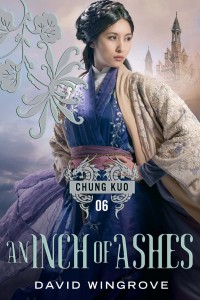 I know what you’re thinking… wasn’t Fei Yen on the cover for The Middle Kingdom? That’s what I thought too. Evidently, that’s Lin Yua, Li Yuan and Li Han Ch’in’s mother who died in childbirth (that’s not really a spoiler if you’ve read the first five pages of TMK). That makes the official cover line-up:

This could clear up any remaining confusion about that, at least until #8 comes along…

More news at it comes in.