The Wertzone’s review of Ice and Fire has been recently published, detailing everything we should come to expect by now:

…well-written, fast-paced and page-turning read […] another solid instalment in what is turning out to be an impressive SF epic.

Go read the full review, and while you’re there, check out Adam’s other posts, which are definitely worth reading to any sci-fi/fantasy fan.

Sources indicate the publication date for Book 5: The Art of War has been solidified for February 1, 2013. Or 1 Februrary 2013 for you European types. So mark it on your calendars and take the day off work. You’ve got some reading to do! (Ice and Fire, Book 4, will be available Dec. 1, of course).

On Nov. 15 in the heart of Beijing, just a short walk from the Forbidden City, a line of seven men—all with neatly coiffed, dyed black hair—emerged from behind a giant screen adorned with red-crowned cranes. Thus at shortly before noon was the world introduced to a powerful clique, headed by Xi Jinping, that will rule China. The new Politburo Standing Committee, as the clutch of seven is called, was unveiled at the Communist-era Great Hall of the People, nearly an hour later than was initially expected. First to stride the crimson-carpeted stage was Xi, the new General Secretary of the Chinese Communist Party and longtime presumed heir of outgoing leader Hu Jintao. But even if Xi walked out first, he is only the first among equals in a country that has traded the personality cult of the Chairman Mao days for a collective-leadership style. In China, there is not just one wizard, but seven.

David’s October 24th predictions were correct. He sends word that in a week or so, he’ll be starting a new short story, entitled “A Day Like This,” set in 2043, and involving… the seven members of the CCP politburo. 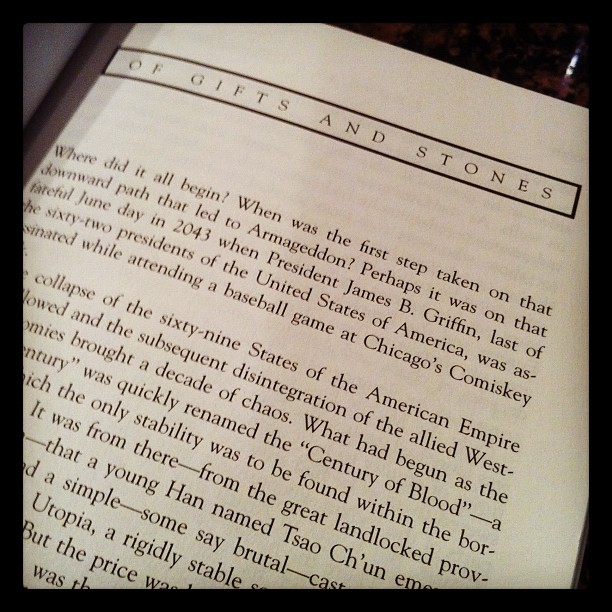 Taken from an old mass market paperback of 1997’s Days of Bitter Strength. Here’s to hoping David keeps the title when the time rolls around again…

Here’s an interview from the French television program Etonnants Voyageurs, in which David was part of an interview panel in 2009. David’s the first one interviewed, and if you don’t speak French, don’t fret. David speaks in English during his segments. You also get to catch a glimpse of the very different cover of Zhongguo: la montagne blanche, the French version of the original series The White Mountain. The worthwhile parts in the video are at 1:00 and 32:00.