Out with the old: A while back, I wrote about Kowloon Walled City, an area of Hong Kong, now demolished, that was seemingly a hotbed for lawlessness, chaos, and corruption. It turns out, this site’s forum was turning into its own kind of Kowloon Walled City, filled with spambots trying to take over, with 20,000+ spam posts in some areas. They’re smarter than captchas and other anti-spam measures, and when this site’s host, GoDaddy, issued a warning that they would take punitive measures since the forum database had reached 4 gigs of data (an insane number for a text-based forum), it became apparent that, just like Kowloon Walled City, the authorities (me) would have to bulldoze it. You’ll see the forum link is no longer there, and I sincerely apologize that the records of some interesting and thought-provoking conversations are now lost to the ether. I will be investigating a more sustainable forum solution, as I don’t want that part of our community to disappear forever – suggestions are welcome from those with experience in the area.

In with the new: Some exciting news on the Roads to Moscow front. Here’s the final cover for Book 1: The Empire of Time, complete with tagline: “In a war across millennia, history will be rewritten…” 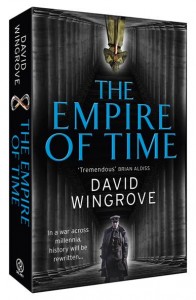 The image should be live on the Amazon.co.uk listing within the week, where, by the way you can pre-order the book (in Kindle or paperback versions), which will be released on April 3, 2014.