A nice blog entry, longer and more casual this time, sent along by David. Full text after the break.

Oh, and hit play on this while you read.

Who Got Caught And Who Got Free

It was roughly eight o clock on Wednesday evening, when – having finished the first draft of the new Chung Kuo story, “One Moment Of Bright Intensity” – I did what I so often do when I’ve finished something – I had a leisurely evening with my earphones on, trawling the net.

Now there are numerous major things that I like, in terms of books, music, films etc. The big stuff that sells well and that’s very popular. Neil Young, Bowie, The Beatles, Back To The Future, Die Hard (two especially), George R R Martin and J RR Tolkein. You get the idea. The good stuff that EVERYONE knows about. But a lot of the stuff I really, really like is esoteric and small. But equally good.

END_OF_DOCUMENT_TOKEN_TO_BE_REPLACED

Hot off the presses: foreign rights to the new Chung Kuo series have sold in Turkey (in addition to the previously secured France and Indonesia). They’re going to run 1,000 copies of Son of Heaven and Daylight on Iron Mountain to test the waters in a country that isn’t known for its huge sci-fi following.

Also, word on the street is that Mr. Wingrove is about a third of the way through a new Chung Kuo story (probably a short story), One Moment of Bright Intensity. No details about the plot or how it fits into the Chung Kuo universe just yet, but I will post more news as it comes.

Lastly, new contributors (notably Adam from The Wertzone) to the Chung Kuo Wiki at Wikia have been hard at work making updates and providing some structure to the pages. It’s coming along nicely. If you don’t already know, anybody can contribute to the wiki, including YOU – the goal is to make it an encyclopedia of all things in the Chung Kuo universe.

Brad Murgen, author and Chung Kuo fan, sent along a link to his review and commentary of the original 8-book series, which he jumped into after reading Son of Heaven and Daylight on Iron Mountain by finding used copies on eBay (which I’ve recommended avoiding if you can help it). His reflections are very thorough, and Brad reaches the same conclusions most readers do upon finishing the series.

If you’re a series veteran, it’s a nice read — it’s sure to bring back fond memories and fuzzy feelings of when you first went through the series. Highly recommended. If you’re new to the series, beware of the (clearly marked) serious, hardcore, detailed, ending-ruining spoilers – many or most of which may not even apply in the recasting. Read at your own risk.

Here’s the full resolution cover for Book 5: The Art of War. Looks like DeVore, I believe. 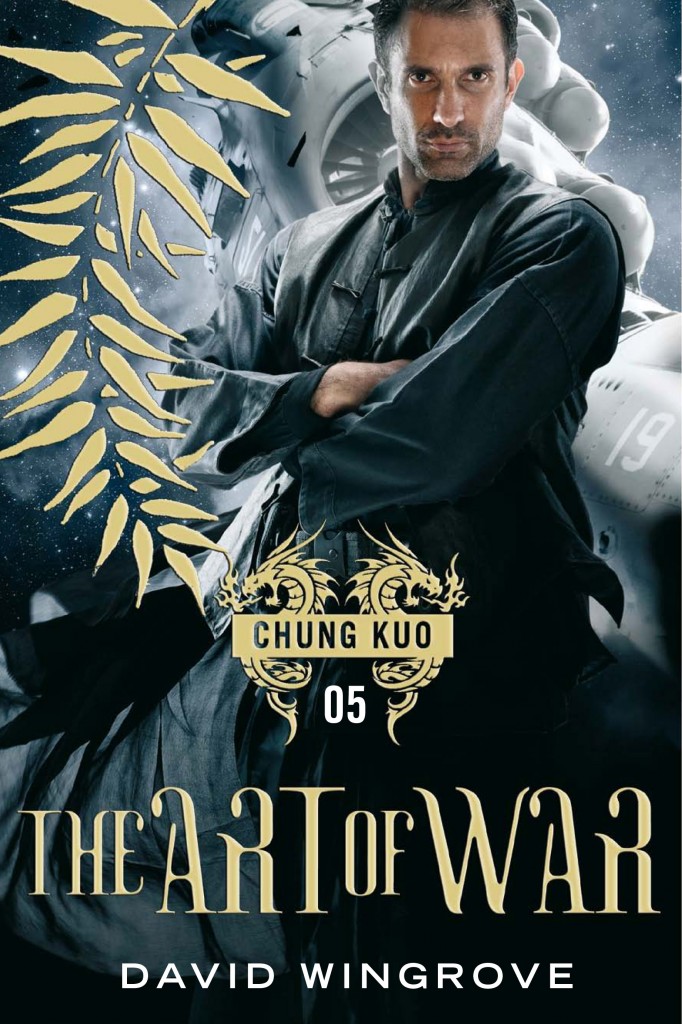 David has sent along a ten day journal. Topics include Ice and Fire, Roads to Moscow, the Olympic Games, and more. Thanks David!

Full text continued after the break…

After nearly three months of miserable wet weather, we woke to sunshine, our little world – our
England – transformed. We’d got up early and were dressed and ready to go to watch the Olympic
torch pass by at the bottom of our street, less than five hundred yards from where we live, here in
this leafy Islington square. It was due to pass at fifteen minutes past eight, and I have to admit that
I had very low expectations. From what I’d heard there were 33 torches making similar trips across
London, and I couldn’t imagine they’d be anything special, but it was never going to happen in my
lifetime again, so I thought I’d check it out.

To our surprise, the bottom of the room was packed with people, and, looking up and down the
main road, it looked like there were people six to eight deep all the way along its very long length,
not to speak of people sitting on high walls or standing on their balconies, with a good half of them
waving union jack flags. Our friends and neighbours Patty and Richard were there with their kids, as
we were with ours, and after chatting for a few minutes, we realised the procession was headed up
the road towards us. The crowd went wild.

The police motorbikes were first, and to my astonishment their riders were grinning and high-
fiving people as they slowly drove along. That set the tone. What followed was a twenty minute
procession with the Games’ sponsors product names emblazoned on the brightly-coloured sides
of the huge coaches, and dancers and yet more dancers, and cheery-looking helpers, and bouncy
music and… then the torch bearer, making her way toward the town hall. All incredibly impressive,
and made more so by the strongly positive atmosphere of the crowd. The noise was amazing (and
deafening) and we walked back with big smiles on our faces. Hey..,. perhaps the Games were going
to be okay after all. Later on, I was to learn that several million people had turned out to all the
various processions going on across the capital.

The rest of that day I spent at the computer, working on the synopsis of a new book I’ve been
putting together these past few weeks. Now I’m not going to say anything about what this new thing
is, not until I’ve got a sale, anyway, but whilst it’s quite definitely science fiction, it’s also a total
departure. Come the evening, when I finally backed off, I had over thirty five pages of synopsis, in
single-space format. And it was almost there. Two books, as it turned out, and a total of 62 chapters.
Two big stories intercut. I’ve written six of those chapters already, and I think I’ve got the tone of it.
But beyond that…. Well, watch this space.