David’s been featured in a superb Q&A session at a book blog called The Book Plank. He goes into great detail about how he started writing, his motivations behind Chung Kuo, and a glimpse at things to come. There’s even a shout-out to this site!

Check it out now.

David has been (again) incredibly kind by allowing me to post another short story from the Expanded Universe on this site. This story is One Moment Of Bright Intensity, which takes place in the year 2196 at a point in The Middle Kingdom on pages 24-26 (Chapter 26, “Fire And Ice”). This is my favorite story among this, Paperhouse, and Black Stone, White (which are all excellent, of course).

Without further ado, here’s the story. Full text appears after the break. You can also download the PDF to read offline.

She stood there, among the bowing maids, waiting to be assigned. There were a thousand of them gathered there in GenSyn’s Great Hall, maybe more, though she had never thought to make such a calculation; had never considered what existed beyond the backs of those who stood in front of her; maids like herself, each dressed identically.

Life for her was a haze. It always had been, from the moment they had lifted her from the vats, the amniotic fluid dripping from her limbs. A succession of unmarked moments, leading to this place. It was not to be questioned. Why should it be? Hers was a life of functionality. Of directed purpose. There was no room in it for questions; no space allocated in her long working days for any concept of self.

And so she waited, as the men – GenSyn creations all, of a much higher mental level; creatures that could think and reason and remember – went from row to row, handing out their allocated tasks, going about their business as if this were just another day.

Only this day was different. Today they had a guest, come to see around the massive GenSyn plant. Not that she was in any fashion curious. Why should she be? How could the Great Man’s presence here affect her in any way? Not that she even began to wonder who he was and what he was doing there. No. If she had been a statue she would have showed the same disinterest. The same… nullity. After all, she was just a GenSyn maid, created in the vats, the GenSyn logo – a capital G with a smaller S inside – imprinted into the pale flesh of her neck. END_OF_DOCUMENT_TOKEN_TO_BE_REPLACED

Just a friendly reminder that Book 6: An Inch of Ashes was just released on paperback and ebook! Go get it! 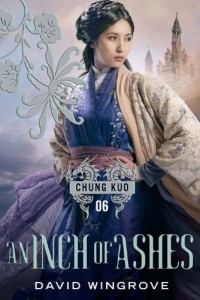