Breaking news! Several of you have asked about the Chung Kuo-inspired album by UK electronic outfit Tranceport, of which most traces had descended into the bowels of the internet, seemingly never to be heard from again.

Well, original Tranceport band member Peri Urban has recently uploaded all of the tracks to a Bandcamp site. All of the tunes are available to listen for free, or you can purchase a download of the album for a reasonably low price.

Head on over to the site and check it out!

David has sent along a link to an article at the Wall Street Journal about how the ancient game of wei chi (wei qi in pinyin) is reflective of the geopolitical strategy of China.

A 2,000-year-old board game holds the key to understanding how the Chinese really think—and U.S. officials had better learn to play if they want to win the real competition.

[…]  Learning the ancient board game of wei qi, known in the U.S. as Go, can teach non-Chinese how to see the geostrategic “board” the same way that Chinese leaders do […]

Very interesting, especially when keeping in mind how the game was used in Chung Kuo. Read the full article at the WSJ here.

As promised, another short piece by David regarding Thatcher and Banks. Thanks to him, as ever.

The last few days have been strange. First came the (for me) shock of hearing of Iain Banks’ impending death from late-stage gall bladder cancer, then, two days ago, the news of Maggie Thatcher’s death.

Let’s talk of the last first. I’ve always claimed – much to my daughters’ horror – that I would throw a street party the day Thatcher died. I didn’t like the woman or her views and feel that she was the most divisive and nasty politician we had in this small country of ours in the whole of the 20th century. Don’t speak ill of the dead, they say, but where do you draw the discriminating line? Do we not speak ill of Hitler, or Stalin or Pol Pot? Okay. You’re going to tell me that she’s not evil in the way those men were evil, and maybe that’s so, only the woman was heartless, and what she did was to bring this tolerant lovely country of ours close to being a police state. In fact, I’d say she used the police force as her private army back in the eighties. Class War was what she waged.

If you weren’t in England (and Wales, Scotland and Northern Ireland) in the eighties, then you won’t quite understand the sheer hatred of so many people for Thatcher. To us she was a lying, two-faced bitch, who served the rich and destroyed the communities of the poor. The sheer weight of suffering she caused is indescribable. Let’s not pussy-foot about. She was a brutal tyrant, in the service of greed. Throughout her ‘reign’ as prime minister we had endless riots, endless angry protests. And the reason for this? Her lack of compassion. She claimed to be a unifier. That was a total lie. She almost brought this country close to civil war at times. To the point where, after the Brighton bombing, huge numbers of us felt not outrage at what the IRA had done, but disappointment that a certain woman had survived the blast.

It had to be done, some claim. To free us from the grip of the trade unions and allow us – as an economy – to grow and compete properly in the world. I don’t think so. I think the same goals could have been achieved through more peaceful, less violent means. Oh, and don’t forget the stock market crashes that happened while she was in power, nor the massive numbers of unemployed (remember cardboard city?). A lot of people are talking about her ‘legacy’. Well there’s a certain truth in that. She did leave a legacy – in those communities she destroyed, where still, thirty years on, they are suffering unemployment and severe poverty. Second and third generation poverty.

So no. I’ll shed no tears for Thatcher. Unlike for my dear fellow writer, Iain Banks, who was never anything but kind and generous to me, and whose company, on those too few occasions I shared it, was much treasured. I’ll grieve deeply on the day Iain finally dies – and I hope it’s not too soon or that he suffers too much. His ‘Culture’ novels are superb, incidentally, and I’m a great fan. Iain is my generation – only a year older than me – and that too makes his fatal illness more poignant for me. There for the grace of god…

Well, that’s it for now. Or almost so. Here’s a prediction. That next Wednesday, when Thatcher’s buried in a state ceremony, there will be huge numbers of protestors out on the streets, and there will once again be riots. Because that cow of a woman was hated by not a few, but by millions. Oh, and you’ve got to be some piece of work to achieve that thirty-odd years after you’ve left power.

Here it is, folks: the cover art for Book 7: The Broken Wheel, featuring a young Li Yuan. 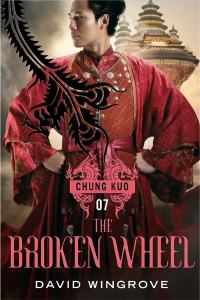 Soon forthcoming will be another short piece by David, regarding sad news of fellow writer Iain Banks, and possibly something about the recently departed Iron Lady.

I also came across this curious item referencing something called Chung Kuo: The Epic Begins, and will see if I can drudge up some more information, since this is new to me.