Daylight on Iron Mountain is almost upon us! I can say, firsthand, it’s not to be missed. Pre-order your copy today!

Get the hardcover edition from Amazon.co.uk here.

Get the Kindle edition from Amazon.co.uk here.

Looking forward to the discussion, debates, and insights soon enough!

What follows is a review of the soon-to-be-published Daylight on Iron Mountain (Chung Kuo Book II), written from the point of view of someone who is familiar with what is to come in the upcoming books. Some minor plot and character details of Book 2 are discussed, but I’ve tried to refrain from overt spoilers. That said, if you want to go in to the second volume with no foreknowledge of what is to come, stop reading here. 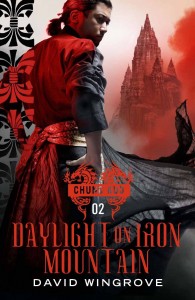 It’s a mighty span from rural England of old to the mighty superstructure of icy stacks that we Chung Kuo veterans are so familiar with, but with the second book in the recast series, the span is crossed with the masterful strokes of intrigue, tension, love, betrayal, and survival that Wingrove so constantly delivers. Daylight is in every way more a traditional Chung Kuo book than its predecessor – in Son of Heaven, we only see the City in a stroke – a glimpse on the edge of the horizon. Daylight, however, is framed within the hexagonal stacks of the City, populated with Han characters and culture (note when Jake and Mary share the occasional cup of ch’a).

The bulk of the book is split into two sections – the first focused primarily on Jake’s attempts to build a life for himself in the City by pursuing a chance career opportunity with GenSyn, the second focused on the shifting balance of power between Tsao Ch’un and the Seven culminating in all-out war, punctuated with an increasingly hostile courtroom drama involving Jake. The interweaving of the main plots and subplots is more characteristic of the main sequence novels – there’s more going on here than Book 1 – but it doesn’t reach the breadth of later volumes, understandably.

We’re exposed to a wider range of characters in the second book – significantly more of them Han than the previous volume. And there’s plenty of variation between compassionate, right-doing Han and the antagonistic, malevolent versions to easily dissolve any arguments levied against Wingrove for his so-called “racism.”

Jake, as expected, remains the primary protagonist, and the effects of the passing years and conflicts are realistically evident – he becomes more somber and accepting of circumstances as a man past his middle years, then almost comically curmudgeonly as an old man. The previously elusive Tsao Ch’un is a mainstay in Daylight, and his whimsical, seemingly at-times juvenile attitude towards his power sheds a new dimension behind the building of the City – almost like a toddler with too much power, prone to temper tantrums. He eventually devolves from the cold, calculating tyrannical despot to a genuinely insane madman who’s lost the advantage of what he once had of his logical faculties. Amos Shepherd is present as well, and Wingrove plants a few faint seeds with what is to come with that family.

We’re also treated to a behind-the-scenes tour of the growing GenSyn, which is almost as pervasive in world politics as it is in the main Chung Kuo timeline, and the brief illustrations of the early Ebert family are rewarding. Similarly, although Wingrove doesn’t delve too deeply into the characters of the individual Seven, it’s exciting to see familiar family names of the T’ang (Li, Tsu, Wang), knowing that we’re seeing the seeds of the future’s main characters. Interesting, too, how in some ways (and I suppose I’m thinking more of the Li line here), character traits seem to be inherited – Li Chao Ch’in strongly resembles his descendant Li Shai Tung in his pride, nobility, and inner struggles.

Looking back at the two prequels, the only thing I’ve found remotely disappointing is that we don’t – maybe with the exception of Jake – really get to know the main characters as well as we do in the main sequence, like Kao Chen, Li Yuan, Kim, Ben, etc. This isn’t so much a complaint as it is an observation – with the span of time covered by the first two books it’s impossible to cover as much detail as with, for example, Li Yuan (from his birth in the prologue in The Middle Kingdom all the way through the end of the sequence). But, that said, with Wingrove’s obvious adeptness at creating complex plots and characters, it’s a shame that so much had to be covered in only two short prequel novels – I could easily see this time period expanded into its own sequence. But, such is the nature of the prequel beast.

To conclude, Daylight does exactly what it needs to do to bridge the gap between Son of Heaven and the original sequence, and does it in a beautifully crafted way. Again, Wingrove fails to disappoint.

Daylight on Iron Mountain will be published in hardcover the UK on November 1, 2011. Details about the e-book version are (hopefully) forthcoming on the official site. The publishing program for the remaining books is, evidently, more expedient, at six books a year, and I’m looking very forward to restarting the main sequence (this will be my third time on this adventure). I also understand that a number of short stories within the Chung Kuo universe are well underway, hopefully enough to stand as a separate compilation.