Wingrove on Bradbury and the Chinese space program. Thanks as always, David!

I was sad to see the obituaries for Ray Bradbury recently, but that said, he did have ninety one years
on this planet, and he did write a lot of good (no, rephrase that, BRILLIANT) work which will live on
long into this century (let’s hope). I was fortunate enough to correspond with the man himself back
in 1983/84, when I persuaded him to write an article for a book I was editing – THE SCIENCE FICTION
SOURCE BOOK. In his letters he was generous, and humorous, but what I most remember is the
garishly illustrated heading to his correspondence, which took up a good half of the A4 page. Though
Bradbury’s best work was already accomplished by the end of the fifties, what a body of work he
left us even so. FAHRENHEIT 451, THE ILLUSTRATED MAN, THE GOLDEN APPLES OF THE SUN, DARK
CARNIVAL, and the best of all, THE MARTIAN CHRONICLES.

Speaking of which, China took one huge step closer to landing a manned crew on Mars the other
day, when their Shenzou-9 capsule – with three crewmen aboard (one of them female) went into
orbit, in practice for the 35 million mile journey they’ll be taking sometime in the near future.
Reading about it, I was reminded of THE RIGHT STUFF yet again, principally because this little crew
was chosen from over 1500 Chinese air force pilots, all of whom would give their right arms to be on
that flight. Not that they’d get to go if they actually lost their right arms… But hey, they’re actually
going ahead and doing this, while we in the West – for as much money as we’re pumping into
private space schemes – just aren’t competing for this prize. And we ought to be. As I’ve said a few
times before in these blogs, NASA’s demise is more than a funding issue. It’s a handing over of the
future to the Chinese. Right now, no one is competing with them. Mars will be theirs, if not in 2020,
then certainly by 2030. And hey… I’m gonna write that one before it becomes a fact.

Meanwhile, back on Planet Earth, the Chinese authorities are acting as only the Chinese authorities
can, in their treatment of the artist, An Wei. Having conjured up a false charge of An Wei owing
them one and a half million in unpaid taxes, they’ve now refused to let him attend the hearings
which are being kept a secret anyway. They hate being criticised, these Mandarins, and their usual
answer (as now) is to bully and intimidate until they get their way. And hey, when I criticise the
Chinese, it isn’t them as a race, but that aspect of Chinese government (especially of the CCP) who
are in control and want to stay that way. In the next week or so I’ll blog about Bo Xilai and all that’s
happening in that regard, lest you missed the whole furore. You simply couldn’t invent this stuff.

By the way… speaking of Bradbury and the piece he wrote for me, I took THE SCIENCE FICTION
SOURCE BOOK down from the selves and had a look at it. Aside from Bradbury, who else did I
persuade to write me a “How I Write” essay? … Well, I was actually quite surprised. The listing is as
follows – Fred Pohl, Poul Anderson, Ray Bradbury, Richard Cowper, Chris Evans, Ursula LeGuin, Larry
Niven, Robert Silverberg, John Sladek, Lisa Tuttle, Gene Wolfe and Roger Zelazny. Not bad, huh?

Okay. Sue got back late last night from the Coronation Street short term conference she was
attending up in Manchester. There’s one every three weeks and I think she rather enjoys staying in a
5-star hotel and sitting round the big table, arguing her side of things against 18 other writers. She’s
currently writing her sixth episode, the first of which gets its TV airing in two weeks’ time. And me?
I’ve been watching some early episodes – from 1960 and 1961… Talk about enduring. There are at

least three characters there in those early shows that are STILL there, 52 years on. But thing were
much slower-paced back then. What would now be told in 25 to 30 scenes, fast-paced and intercut ,
was then told in about ten.

It’s raining here, else I’d be out in the garden, finishing preparing the gap where our wall previously
was, so it can be rebuilt. If it’s dry tomorrow, that’s where I’ll be, so we can get the brickie in and the
wall back up. If not, then I’ll blog about Bo Xilai.

David just kindly sent over another quick blog. Thanks, David! On a related note, has anyone who frequents here read Trillion Year Spree, the expansive history of science fiction by sci-fi heavyweight Brian Aldiss and our own David Wingrove? I’ve always meant to, and maybe this is the time to do it since we’re mid-cycle for Chung Kuo novels.

A Parcel From China

Wednesday brought a parcel from the East. The Post Office, rather than buzz our buzzer
and hand the damn thing over for a signature, chose to leave me one of their red cards
instead, meaning I’d have to go to their offices to collect. Which I did, yesterday morning.
They handed me a heavy parcel, covered in Chinese characters and one side completely
covered in beautiful Chinese stamps (which I’ve kept). I knew what it was straight away. Two
months or so back – before the London book fair – I chased up my colleague Brian Aldiss’s
agents, Curtis Brown, regarding the Chinese edition of TRILLION YEAR SPREE, and whether
it had been published, and if so, whether we could have copies. They said they would, and
so they have… and, unwrapping the thing with an excited tremor, I found they’d sent three
copies of what is a most delightful-looking book. A real chunky volume of 659 pages, part of
a five book series they’re publishing for the Chinese market, and priced at 68 yuan. It really
is a good edition and makes me feel proud of it. But it also makes me think that maybe 2011
Anhui Literature And Art Publishing House might be a possible home for the Chung Kuo
series. They certainly put a great deal of care and effort into making TRILLION look quite
brilliant, and the thought of Chinese – in Nanking, or Beijing, or Xyan – reading it, quite
thrills me.

What else has been happening? Well, second daughter, Amy gave in her notice last Friday,
of a very well paid job that she does seemingly effortlessly, so that she could become a
writer, just like Mum and Dad. She’s organised and talented and there’s no earthly reason
why she shouldn’t make a go of it, but as things stand, they’ve offered her a compromise
deal of doing a three day week, which she might take, as it’ll take the pressure off her in
the first few years. Ten years ago, when she was just 15, she wrote a couple of Fan Fiction
novels, based on Final Fantasy and they were tremendously popular (she got over 7,500 hits
when the second one was posted on-line, and had a big following). So wish her luck, you
guys, and as soon as there is something to report, I’ll report it.

As if that wasn’t enough, number one daughter, Jessica, has also been making news by
winning one of the most prestigious awards in world advertising – in fact two of them! The
Silver Lions (awarded at Cannes, and advertising’s version of the Oscars) were won for work
she’d done on a Tourism Ireland campaign she ran with her partner Matt. It could have been
better – they could have got a Golden Lion, but hey… it ain’t every day you win something
like this, and I’m delighted for my girl, who’s a classic works-hard-parties-even-harder girl!

I’ll be blogging again tomorrow – about An Wei, the Chinese on Mars, Ray Bradbury, and
what’s happening on the publication front. Oh, and just to mention that I’ve copy-edited
roughly half a million words of CHUNG KUO since I last wrote. When my mother asked me
what I’d been up to, I murmured, “nothing much”.

Last night was the Dark Societies event at Waterstones, of which David was a featured speaker. He was kind enough to write up his thoughts about the night and send it our way. Sounds like it was a good event. Hopefully one of these days we’ll see him on this side of the Atlantic.

Last night was most enjoyable. Three authors, a room full of fans, and time enough to read excerpts,
have a panel discussion and a lively question and answer session.

The venue was the sixth floor of Waterstones, in Piccadilly, reputedly the biggest bookshop in
Europe, and the three authors were Juliana Baggott, Martine McDonagh… and myself.

The event was set to start at seven, but we authors met up before that – in the bar/restaurant on
the fifth floor, shortly after six fifteen. A nerve- calming drink or two… and then up a flight into a
large room, packed with a host of fee-paying people, there to hear what we had to say and to put
their opinion on matters post-Apocalyptic.

The title of the talk was ‘Dark Societies’ and was to do with the creation of dystopias. Martine
McDonagh– forties, slender, blonde-haired and from Brighton – had written a debut novel, I Have
Waited And You Have Come, set thirties years from now in rural Cheshire (that’s just south of
Liverpool, for those of you who don’t know). Juliana Baggott – forties, slender, dark-haired and
from the USA – had written a lot before Pure, the first book of a futuristic trilogy, but never quite so
explicitly in the SF genre. In the session that followed, we enjoyed throwing the questions between
us. But to start with we each gave a small reading from our works.

Influenced by the theme of the evening, I chose to read the first two pages of Chapter 24 of Daylight
On Iron Mountain, with Jake Reed’s waking thoughts about the past. It’s little more than 500 words,
but I think it says a great deal about the ‘Big Lie’ that lies behind the society of Chung Kuo. And,
from three lines in, I knew I had my audience. Sometimes you do, sometimes you don’t. Last night I
definitely did. When I finished, with that deliberately understated ending to the scene – “Just wait
there. I’ll bring you a cuppa in bed.” – you could feel the indrawn breath of everybody in the room.
An hour and a half later, as we signed books in one corner of the room, people drifted across, some
to get their books signed, but most mainly to congratulate me on my reading. Which is incredibly
gratifying. To know you got through to a whole new bunch of people who’d never read a word of
mine, maybe never even heard about me until they’d come along. And, before I’d been given a
chance to get used to this non-hermetic version of myself, Sue whipped me off home on the bus.

Apocalypses. It’s not the sheer scale of them that brings home their awfulness, it’s the little things
that affect individuals. When the world ends, billions of ‘insignificant’ stories die with it. In that brief
passage I wanted to capture something of the poignancy – the true depth of loss – in one man’s life.
And for once, you know, I think I got it right.

Also, David reports that he’ll be making final changes to Book 5 (The Art of War) and Book 6 (An Inch of Ashes) over the next fortnight, and sending along some blogs that he’ll be writing over the bank holiday. As I’m American, I don’t know what a fortnight or a bank holiday are, but I assume this to be good news (kidding, of course). 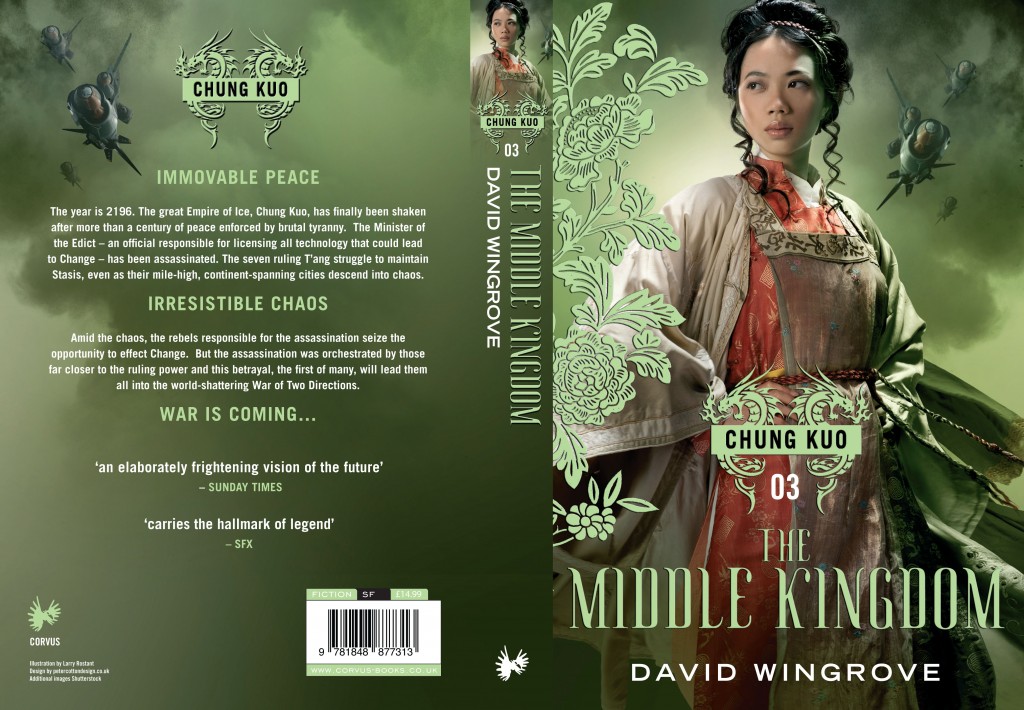 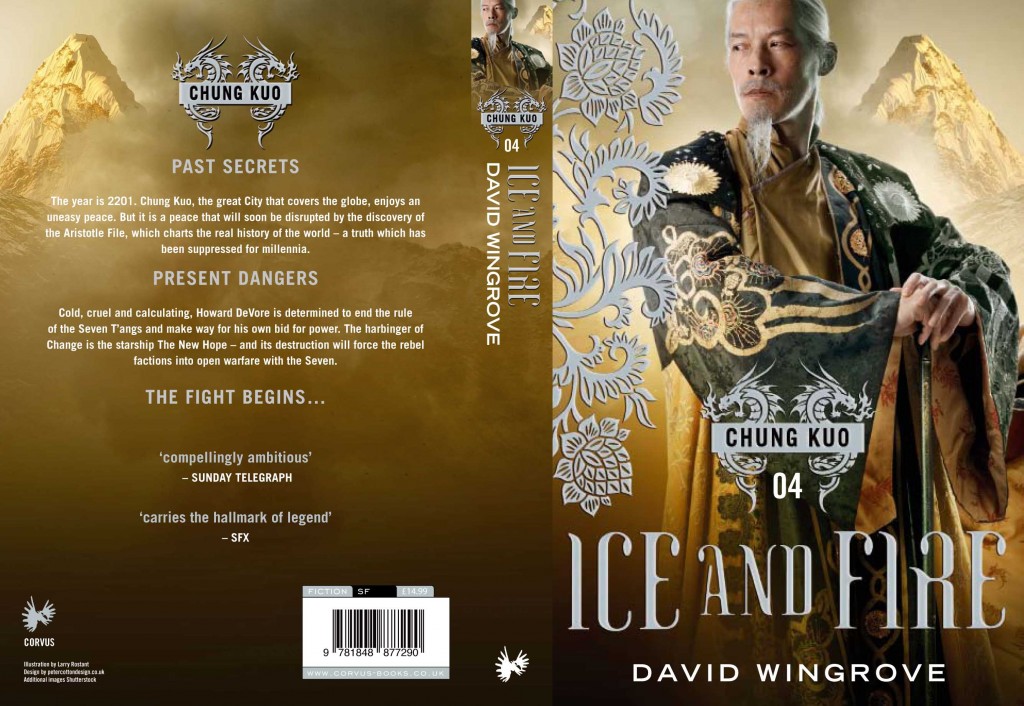