SFBook has published the first review of The Middle Kingdom, the first novel in the main story of Chung Kuo and third volume of the series.

The writing is, as ever, quite exceptional […] Elegant with an almost poetic edge […] a powerful vision of a wonderfully rich dystopia […] Chung Kuo is fast becoming a contender for the dictionary definition of ‘epic’, grand in scope and powerful in vision…”

Couldn’t have said it better myself. Head on over to read the full spoiler-free review, and start counting down the days until the release!

Nothing fun from David today, but I do have some thoughts to share about imagery in the world of Chung Kuo — something we haven’t really discussed at length here (touched upon briefly when I redesigned the site a few months back) but I think deserves some discourse. This’ll apply more to what will take place starting in The Middle Kingdom, but was touched on briefly in Daylight and Paperhouse, and obviously these are my own opinions and interpretations.

Jump past the break for more on Environments and Imagery in Chung Kuo.

END_OF_DOCUMENT_TOKEN_TO_BE_REPLACED

Also, the the Kindle version claims to be Book 3 of “Chung Kao.” We’ll see if that gets fixed too. 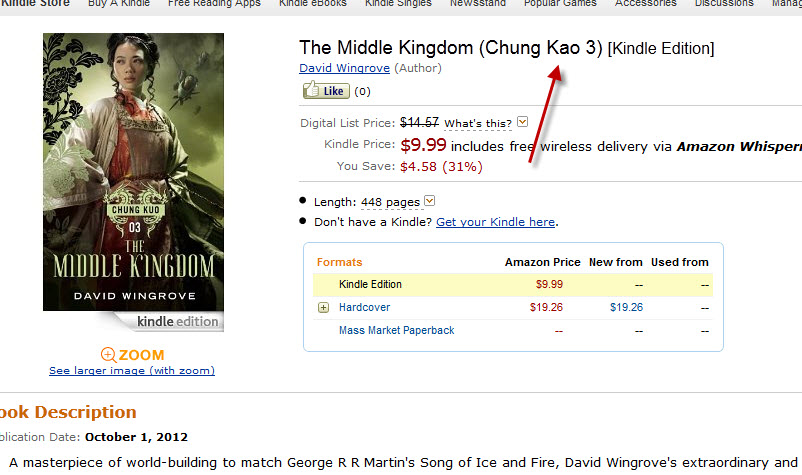 I’m honored and proud to present Paperhouse, the first short story in the Chung Kuo universe released to the world.  David has been exceedingly generous to present this to us, especially by using a fan website as the outlet. Infinite thanks to him for sharing this.

Set in the year 2067, Paperhouse story takes place just between Son of Heaven and Daylight on Iron Mountain. David also mentioned that “It might also interest readers to note what music I was playing while I was writing this: Tool, Nine Inch Nails, Caravan, Tangerine Dream, Can, Lynyrd Skynyrd, Wishbone Ash. Bombay Bicycle Club, Alan Stivell, The Who. And others.”

Paperhouse will be featured as the featured landing page on this website for a week or two before reverting to the main page, but the story will continue to be available in The Vault section, and the dedicated page will be accessible from the pages menu to the side.

And if you haven’t caught it yet, here’s the story in its entirety, after the break. Happy reading!

END_OF_DOCUMENT_TOKEN_TO_BE_REPLACED

Since there’s been a lot of recent interest in the spin-off stories on this site, David has been extraordinarily generous by providing us with this detailed breakdown of all the planned stories in the Chung Kuo universe that aren’t included in the main sequence of novels. This “expanded universe,” as planned, is much bigger than I ever could have anticipated.

There’s a spoiler warning before the breakdown of each story’s plot – if you’re new to the series, I desperately urge you to heed the warning; these plot summaries are related to major plot points in the main sequence. For those who have read the original 8, this set of teasers will be a rare treat and a taste of things to come.

This also gives those of us working on the wiki a lot of articles to add!

Full text appears after the break.

And, as always, a major thank you to David for providing this wealth of supplemental material.

Okay. A lot of you have shown interest in Chung Kuo 2.01, or the spin-off stories. That’s great, and spurs me on to get the things written. But let me specify what I’ve got planned out, because – as it’s a Chung Kuo venture – it’s BIG. Okay. Here’s the details

Oh yeah, and this is the part that’ll make you think I’m totally batty, but…

There were whole parts of CHUNG KUO which, because of the way the story-lines developed, either couldn’t be used, or were things I decided not to pursue. But, going through all of the box files, I realised that what I had was a complete other take on CHUNG KUO – one which cuts right across the grain of the epic version. A future history, in fact, rather like Robert A Heinlein’s. That is, told through a series of stories (short and long), which, in their entirety, will give a whole new perspective on the world of CHUNG KUO.

END_OF_DOCUMENT_TOKEN_TO_BE_REPLACED

David just sent his commentary on the latest political scandal in the Middle Kingdom. Thanks David!

Ten days after he was last seen in public – on the first of September – Xi Jinping, said by many
to be the replacement for Hu Jintao as leader of the Communist Party of China, when the “fifth
generation” take over in the next month or two, has, it seems, had a mild heart attack.

Okay. Mystery solved. And it was indeed – for ten whole days – a mystery, and a much discussed
one at that. The whole of China – yes, and even the world outside the Middle Kingdom – were
speculating about whether he’d met the same fate as various past leaders-in-waiting. Gone down
in a plane, perhaps? (Look up Lin Biao on the net and see what I mean. Back then it took the
Communist Party two months to explain why Lin Biao wasn’t making any appearances.)

As far as Xi Jinping is concerned, the rumour mill went into overdrive. But now, it seems,
everything’s explained. All’s well again.

Only personally I’d say, until we see the man, walking and talking and with clearly identifiable and
datable documents surrounding him or in his actual hands – a dated newspaper, for instance – I
personally am not sure he’s still alive.

If that’s all it was, a heart attack and a mild one at that; one which won’t stop him taking up his post,
then why haven’t we seen a shot of him lying there, smiling, in bed, getting some rest after his mild
myorcardial infarction? A little bit of reassurance is all the Chinese people need, surely?

Oh, and remember… the latest statements are by the same people who said Xi Jinping had “hurt his
back” when he went for his daily swim. But again, if that’s all it was, a simple shot of the glorious
leader sat in a chair, resting his back, was all it’d take to stop the rumours getting out of hand.

Why aren’t they showing these? Or is it true what other sources are saying and that Xi Jinping was
hurt, possibly even killed in a car accident that was also an assassination attempt?

Oh, and now – a mere thirty minutes back – Xi Jinping has had an official mention, as one of five
leading government officials who publicly sent their condolences to a 102-year-old general who
recently died. But there’s still no picture of him, still no official explanation of events. And why
should that be? Has he been badly injured and they still don’t know whether he’ll survive or not?

Of course, it may all just be poor media management on the part of his officials. They may have
reasoned that it would be better to hide Xi Jinping away for a while than to show him looking frail
at the very moment when – as overall leader of China – they want him to look powerful. If so, I
think they’re wrong. It’s no small thing, after all. This uncertainty as to his whereabouts has actually
resulted in a distinct wobble on the stock exchanges of the world. Share prices have fallen.

So, as I’m, fond of saying, watch this space, and let’s see where this story goes and just how long
it’ll be before we either see the man, walking about as alive as you and me, or be watching a state
broadcast announcing his tragic death. Because unless he’s part of Schrodinger’s Politburo, he’s
either one or the other.

Yeah, and in case I didn’t mention – a propos of that now-disgraced other candidate, Bo Xilai –
there is a power struggle going on at the very highest level of the Chinese government. One whose
outcome will very much affect all of our futures. The big question behind the personalities is – Is
China going to take a big step towards the West, or a big step away?

So let’s hope Xi Jinping is alive and recuperating fast. Because the alternatives to him aren’t worth
considering. A return to Maoism? No thank you. Xi Jinping…. hurry back.

David has just sent this along. Lots of good things in store, including news of Chung Kuo side-stories – one of which will be exclusive to this site! Stay tuned, folks.

Brief News From The Home Front

It’s been birthday season here in sunny Islington. Sue began it all with hers on August 18 th – for
which we had a little party with just a few friends round – and then it was Amy’s on the 27th.
We celebrated hers at a café called “Bill’s” at the Angel, with her boyfriend, Ben, Jessica and her
boyfriend, Mark, and Sue and I. That was great fun, and was followed very quickly by my birthday on
the 1st September – with a little birthday bash at our friends’ Icaro and Sarah’s, followed by seconds
at home the day after (with all the family along). We’d then have celebrated Georgia’s, on the 6 th,
but she was in California, which now leaves us anticipating Francesca’s birthday on the 16 th – it’s
her eighteenth, so we’ve agreed she can have a big party, which she’ll share with one of her oldest
friends, Ellie.

And I realise I’ve not followed up on my comments about the Olympics and Paralympics, which Sue
and I have been following with great delight. I commented before about how the atmosphere in
this country seems to have changed, and I still believe that’s so. We’ve shown real spirit these past
few months and coming third on the medal table both times is great. As a nation we can show great
pride at what we’ve achieved. It’s simply very nice to share in the general collective air of positivity
about ourselves.

But my main activity these past few weeks has been to start producing the Chung Kuo spin-off
stories, and I’m pleased to say that they’re going well and I’m enjoying the experience. First off the
line was “One Moment Of Bright Intensity” – an 8000-worder which I hope will be available as a
freebie on Amazon, along with a sample chapter from THE MIDDLE KINGDOM. I followed that story
up with CLOUDS AND RAIN, which weighed in at 12,000 words, and the next to appear was BLACK
STONE, WHITE, a 13,000-worder which kind of fell out of me. It was written from scratch in a day
and a half, with 8000 words of it written in a single mammoth sitting. Hey, and it didn’t feel like
work!

I’m now working (very slowly) on one of the larger spin-offs, a shortish novel called THE DRAGON IN
THE EARTH, which I hope to have done by the end of the month. Alongside that I hope to produce
three other much shorter stories – THE FINDING, FILIAL PIETY and PAPERHOUSE. The last of those
I’ve promised to Matt for the site.

Oh, and I hope to have news about ROADS TO MOSCOW in the next few weeks, so watch this space.
With the publication of Book Three, THE MIDDLE KINGDOM, only five weeks away, I’m feeling highly
energized right now. An American publisher? We’re working on it. Hollywood? We’ve got a guy
working on that, too. So stay tuned (as they say) for a busy last four months of 2012.

And a big “Tsai Chien!” to everyone out there!