David sent this over the American Thanksgiving holiday, when I was holed up visiting relatives with no internet or computer, so my apologies for the last post. Full text after the break.

“Past, Present And Future”

A blog in three parts

One – And The Evening Sings In A Voice Of Amber…

I was just nineteen years and one month old when Al Stewart, the English singer-songwriter, put out his classic album, Past, Present and Future. I was captivated, at first, by the long, (nine minutes fifty seconds) track, “Nostradamus”, which ends the album. But as the years passed, there was one single track that I kept returning to time and again, “Roads To Moscow”, itself a lengthy song, at eight minutes, its subject matter ‘Operation Barbarossa’, Hitler’s invasion of Russia in June 1941. It’s a great song, wonderfully lyrical, a poem set to music. And some while later, while listening to the song, I launched out on a lengthy short story, called “When The Snows Come”, about Hitler and the campaign, and a time traveller who tries to change things and help the Nazis win the war.

We’re talking about the early eighties here. I was sharing a flat with my darling Susan in Islington, and though I was perceived by most people to be only a critic/editor/reviewer of the genre, I had been writing science fiction – SF stories, that is – for the best part of eleven years. As an unpublished writer, I was very much one of the lesser members of our writing group, which we called WRITER’S BLOC. The other writers were all published, and one – Rob Holdstock, had even won the World Fantasy award for his novel, Mythago Wood. The others? Garry Kilworth, Lisa Tuttle, Chris Evans, Simon Ings, Bobby Lamming, Dave Garnett and Geoff Ryman. It was Geoff who, when I presented my far from short 65-pager to the group, suggested that I develop a larger framework to my story and turn it into a novel.

It was a good idea, only I was working on this wee little Chinese-oriented project, and so I left it as it was, a big, sprawling second draft which, in a much rewritten form, now forms Part 2 of the first volume of the trilogy, “In The Footsteps Of Napoleon”. END_OF_DOCUMENT_TOKEN_TO_BE_REPLACED

I’ve closed the poll from the last post, which was overwhelmingly in favor of keeping this site Everything Wingrove. As Brad suggested, I’ll keep the site name the same but possibly change the subtitle… when the time comes. 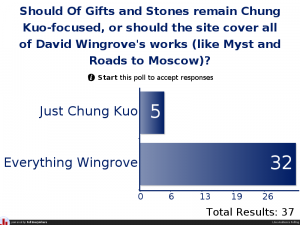 I also have an update from the Man himself, with some good news and some not so good news. I’ll be posting it shortly, but to wrap up this post, I’ll leave you with this: the official cover for Roads to Moscow: Book 1 – The Empire of Time. Click the image for full size.

A note from David forthcoming in a moment…