A Great Wheel Turning is Mr. Wingrove’s primer to the original series and some of its over-arching themes. Those new to the series are advised that not much of this will make sense for another several books. There are some serious spoilers herein, so newcomers are advised to skip it. Veterans are sure to appreciate. Full text after the break…

END_OF_DOCUMENT_TOKEN_TO_BE_REPLACED

Flames Dancing in a Glass chronicles Mr. Wingrove’s reflections regarding the inception of the Chung Kuo franchise. Full text, OCR-proofed for the first time on the web, after the break…

END_OF_DOCUMENT_TOKEN_TO_BE_REPLACED 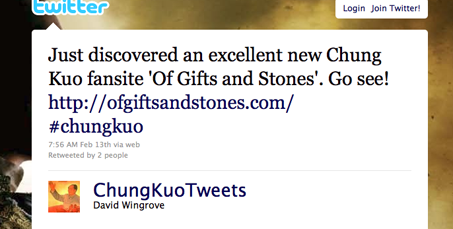 Three Questions is a transcript of a talk given by David Wingrove at the Neal East Bookshop on the evening of September 14, 1989, shortly after the launch of the series. Full text after the break…

END_OF_DOCUMENT_TOKEN_TO_BE_REPLACED

Broad Paths and Narrow Ways, written in 1995, contains Mr. Wingrove’s reflections after seven books into the eight book sequence, including his thoughts on Chung Kuo’s impact on his life and career. Full text after the break…

END_OF_DOCUMENT_TOKEN_TO_BE_REPLACED

As you can clearly see, I’m a big fan of Chung Kuo: the complex world-building, the conflicts of cultures and personalities, the political intrigue, the action, the intricacies of plot. But there’s one  thing, pervasive through though the entire series (both the new and old sequences), that annoys me, confuses me, frustrates me — the one thing that I disagree with to my very core and I wish I could go back and change: Wade-Giles.

You see, Chinese is an interesting language, elegantly simple in some ways (no conjugation!) and strangely difficult in others (a tremendous number of regional dialects, tones, learning all those characters…). I’m sure the Chinese feel the same about Western languages. The standard dialect of Chinese is Mandarin, which is based on the northern dialect of Beijing, the capital. Natively, it’s called Putonghua, or common language. Mandarin, as you might guess, has major differences between English and other Western languages. For example, there are a finite number of syllables in the language, each with four tones, meaning that the pitch changes within the syllable change the meaning (and generally the written character) of the syllable.

Throughout the ages, several systems of romanization have existed which try to represent these Mandarin syllables using Roman alphabet letters. Wade-Giles is one of these forms, and it is the one Mr. Wingrove uses for all Chinese terms in the Chung Kuo series (including “Chung Kuo” itself). This system was put into its final revision in 1912 and was the mostly widely used through the 1970s. In the 1950s, as part of the Communist government’s program to increase literacy across the country, they commissioned the creation of pinyin, which is, in my view (and the view of many others) superior and simpler to Wade-Giles. Pinyin’s now used in all maps made, scholarly literature, the news articles, computers… pretty much everything ever published or created these days… with Chung Kuo being the only exception I know of.

Why did Wingrove stick with the old-school Wade-Giles? His author’s note in the original series indicates that he found it to retain the poetic character of Mandarin. Obviously, I respectfully disagree.

In college I took a two-semester sequence of Elementary Mandarin (it would not be an error to assume that the Chung Kuo novels influenced this decision). To me, pinyin makes far more sense, and after an initial learning curve, is easily internalized. I’m sure Wade-Giles is the same in that last respect, but wouldn’t it make more sense to endure the learning curve for the system in use in the rest of the world? Every single time a Chinese name comes up in Chung Kuo, it takes me an extra beat – just a microsecond – to decode it in my mind and translate how it should sound.

Yes, this would mean that the title of the series would be Zhong Guo. And the spelling of many of the major characters names would be different (for example, Kao Chen would be Gao Zhen). Chinese place names would also look more like what we’re used to — reading “P’ei Ching” in Son of Heaven made shudder, knowing it should really have been Beijing.

I had so hoped that Mr. Wingrove would have switched to pinyin for the re-release. But… if this one little thing is my biggest complaint of the series (yes, bigger than Marriage of the Living Dark, which is most people’s biggest complaint), then I should consider myself lucky. And to those who have zero background in the Chinese language, it probably doesn’t make a dime’s worth of difference either way.

At least it’s not Gwoyeu Romatzyh… that would have simply been a nightmare. Aiya!

Go here for a list of Wade-Giles syllables and their modern Pinyin counterparts.

Second Thoughts is Mr. Wingrove’s reflections on preparation as it pertains to writing a series of this scale. It was written in 1993, roughly halfway through the original sequence.

END_OF_DOCUMENT_TOKEN_TO_BE_REPLACED

Spoiler Alert – This section contains details about Part 2 of Son of Heaven.

My initial reactions and thoughts on Part 2: The East is Red, after the break…

END_OF_DOCUMENT_TOKEN_TO_BE_REPLACED

Back when Bob Newell‘s old Chung Kuo site was up, he graciously hosted a number of Mr. Wingrove’s journal entries and other tidbits.

Since he’s no longer maintaining that site, I’ll periodically post some of these gems so that they can be preserved. Even though the series has been rebooted, the information is still relevant for us hardcore fans. All these entries will be posted under a category called The Vault for easy access in the sidebar.

First is Fallow Years, Mr. Wingrove’s reflections ten years after MotLD was published, including the circumstances and his opinions about the last volume’s generally negative reception.

The entry is in its entirely after the break…