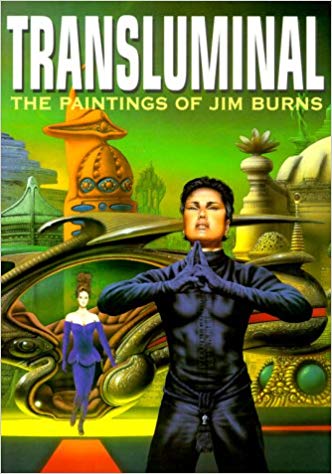 The Stone Within, Book 10 of the Fragile Books re-publication of the Chung Kuo series, is finally published today…  sort of.

Prior to today, it was not available for pre-order or even appearing on any bookstore’s site in either the UK or the US, leaving some of us worried about the volume’s fate. Currently, it’s on the Amazon UK site (not the US, for those of us stateside), but it’s showing as out of stock. A Kindle version is not yet available, either.

Hopefully this will change soon as Amazon receives copies and makes an e-book version available. More news as it comes.

Mr. Wingrove has announced a publication date for Chung Kuo book 10: The Stone Within on his social media: September 20, 2018. Just a little over a month away!

It’s not appearing yet for pre-order on Amazon USA or UK, but I suspect it will soon enough.

It seems as though many of you, based on the comments on the last post, are planning on waiting until all 20 are out before collecting a set. It’s an understandable position – we’ve been burned by publishers a few times now. Personally, I think it’s important to show support by picking up each book as it comes out; I don’t think I have to spell out the logic of what could happen if everybody held off on buying.

On a personal note, I just returned from a two-week vacation in the UK (I’m US-based, if you hadn’t picked up on that already). I was pleased to see this in Forbidden Planet: 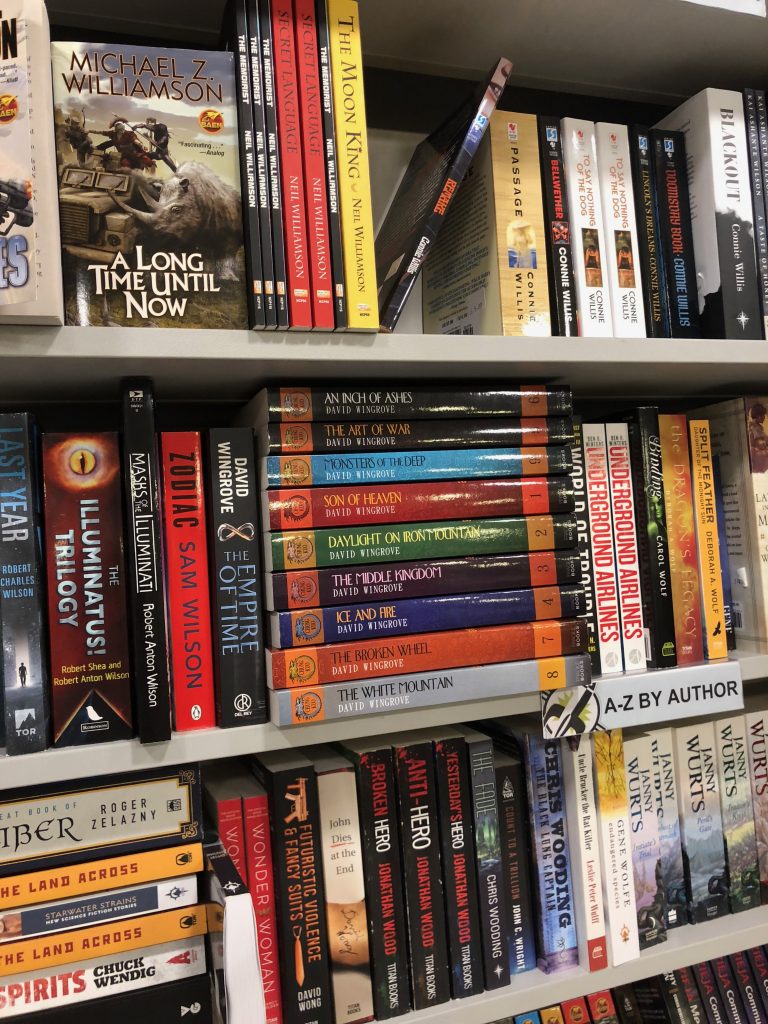 It’s been fairly quiet on the Chung Kuo front these last few months, but Mr. Wingrove has announced on his Facebook page that Book 10: The Stone Within will be published within the year with the exact date to be known hopefully soon. Following the cover art style from the first nine books in the Fragile Books re-release, here’s the ouroboros-themed cover for the volume (click for full size). 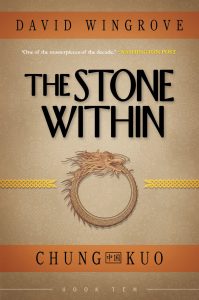 Personally, I’ve recently started a re-read of the Chung Kuo saga. This will be my third time on this journey and I’m currently on Book 3: The Middle Kingdom. Part of this is me missing the story and involvement with this site; another part of it is just procrastinating on my PhD dissertation.

Anyone else out there doing another read-through? Feel free to drop a line below.

Just a quick reminder that Chung Kuo Book 9: Monsters of the Deep will be released by Fragile Books on October 19 – one month’s time. David Wingrove will be signing copies that day at Forbidden Planet on Shaftesbury Avenue from 6-7pm. That’s in London, I think. I don’t know, I live in Miami, where we get hurricanes. Anyhow, if anyone can send along a report or some pictures, that would be great!

David Wingrove was interviewed today on BBC Radio 4 program “Last Word” on the death of his friend and co-author, Brian Aldiss. Skip to 13:30 for the segment on Aldiss.

I’ve had Finches of Mars, one of his last books, next to my bed for several months now, one of many books in a pile I’ve wanted to get through. I’ll have to make finishing it, and getting to others of his, a priority. 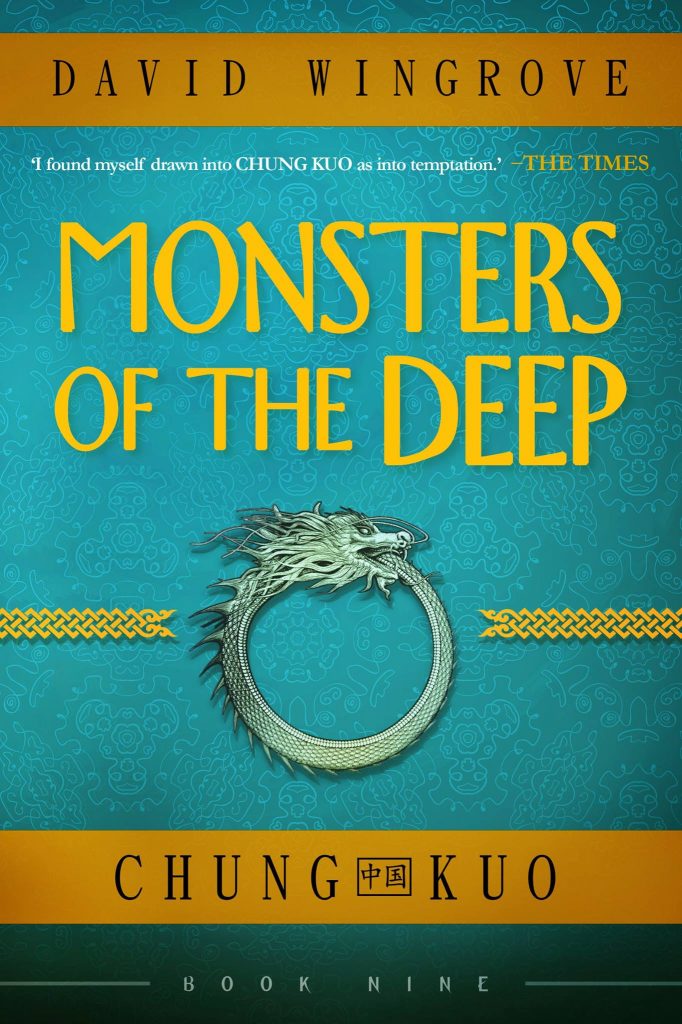 Moments ago, a box containing the first eight books of the Chung Kuo re-re-launch arrived at my doorstep, courtesy of Fragile Media’s Susan Oudot, each containing a kind inscription from the man himself. The books are beautiful — far nicer in person than in any picture. My wife, who is away at a work conference for the week, will likely be none too pleased to return and find that I’ve relocated a picture of the two of us to make room on the Chung Kuo bookshelf in our small library. Yes, the guy who runs the fan blog has a Chung Kuo bookshelf.

Seeing the books in print again, now with a renewed confidence that this time we’ll be able to see things to their proper conclusion under the wing of Fragile Books, is a wonderful feeling.

I just returned late last night from a terrific three-week trek through Asia and I’m exhausted. But, it liooks like a lot happened in my absence, so let’s get through some big updates.

As I believe everyone knows, on June 22, the first eight books of Chung Kuo re-launched under David Wingrove and Susan Oudot’s Fragile Books banner. Susan was kind enough to send along a quick rundown of the launch event that took place that night at Waterstones in Islington along with some photos.

On a sweltering summer’s evening the great and the good gathered at Waterstones bookshop in Islington, north London for the re-launch of CHUNG KUO. David’s new publishing company, Fragile Books, had the prosecco flowing and appropriately-themed Chinese nibbles on offer (along with the obligatory fortune cookies, of course). Among the guests were fantasy author, Michael Cobley, several writers on the world’s longest-running soap opera, Coronation Street, and tv and film star, Rupert Graves (Sherlock, amongst other things). As David’s wife Susan Oudot – Publishing Director of the new venture – said in her speech “It’s a good feeling to know that finally we have control.” Onward and upward.

Next, David Wingrove’s long awaited official page has finally launched (davidwingrove.com) and is definitely worth checking out. There’s info there about Chung Kuo, Roads to Moscow, and Myst, as well as a new blog. I do want to note that there being an official site doesn’t change the fan-based mission of this site. As always, if there’s anything anyone would like to contribute here, please drop me a line. One of these days I’ll get some forums back up and running.

Lastly, while the first eight books of the Chung Kuo re-release are available through the usual channels like Amazon UK, the books are also available at a discount directly from Fragile Books, including to US-based readers.

Susan sends along this note:

Fragile Books are selling directly to fans in the US. If you’re interested in ordering any of the first eight titles, or the complete set at a reduced price, contact David via his Facebook page:  David Wingrove. Or write to the publisher at info@fragilemedialtd.com  Payment is via Paypal.

A Facebook post also indicates that signed copies are available, too (thanks to Goonda for pointing this out during my absence).

Exciting times, indeed. I believe that’s it for now. More news to be posted as it comes in. Many thanks to David and Susan for everything they’ve done for fan outreach, through this site and their own channels.

Greetings from the past! I’ve jumped in from June 10 via Four-Oh. Tonight, Mrs. Ofgiftsandstones and I are traveling to Asia: Bangkok, Hong Kong, Shanghai, and Tokyo for a much needed holiday. I won’t have easy access to a computer, so I’m pre-scheduling this post to remind all loyal Chung Kuo fans that the re-re-issue is out today! Take a look at Amazon UK!

As of June 10, it looks like the first 8 books have a release date of June 22, so hopefully all those editions are up for grabs today.

Leave any thoughts in the comments below (although I’ll be a little slow to respond for a week or two).